After 5 years of research, climbing, writing, and editing, Snoqualmie Rock is finally here! With over 700 routes on 60+ crags, this is a game changer for climbing in the Seattle and North Bend area. The official release date is June 1, 2018. Be sure to get your copy in time for the summer season!

A few years ago, while researching for an upcoming guidebook, I spied a large waterfall very near the city of North Bend. A quick mental note was loosely filed—as if it ever gets cold enough for that high flow falls to freeze! Somehow this little tidbit of information popped back into consciousness earlier this week, but I wasn’t sure that it would still be in condition after the short, very rainy warm-up a few days ago. My guess is that the east flow winds, which funnel down this gulch, help keep this shaded aspect a bit colder than the surrounding hillside. A quick recon provided a good look at the route…which was still huge and blue. Game time.

Today I lined up a great partner in my friend Mark Allen to give the thing a look. I kind of expected the bushwhacking to be intense, but he’s also from the westside and knows how to suffer if the need arises. As it turns out, there were only a few prickly bushes and we found a few overgrown logging roads to speed the approach. The crux of the endeavor was to stay entirely on public lands, but some time spent on the King County Property Viewer showed a tiny sliver of land that touches a public road somewhat close to the base of the route. Not ideal, but it would have to do.

The route itself is likely the closest multi-pitch ice to Seattle. Only 28 miles as the crow flies! And to make the day even more special, we were treated to an unbelievable full moon in the morning hours and a pair of black bears lumbering along in the woods on the hike out. What a special place! Treat it gently. 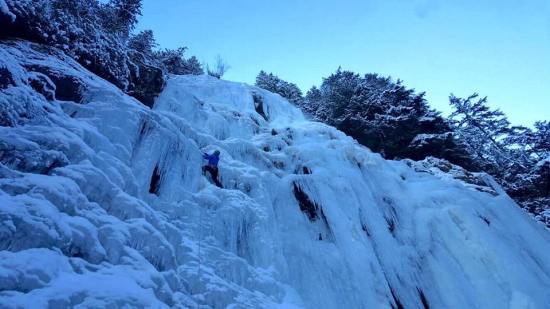 Descent: Descend the right side of the route. We did two single rope rappels from trees, then two v-threads back to the snowy ledge. Downclimb (or rappel) to the right to a large tree, where one more single rope rap leads to the base.

Note: I have removed access and approach information due to previously unknown history of access issues in this area, although the route and parking we used are entirely on public land.

Greetings from Lofoten, Norway! More about that soon, but I thought that I would quickly share some photos from a continuing education program that I took last month. The AMGA Ski Guides Course is the first in a series of three that trains ski guides on the skills and techniques for guiding in ski touring and ski mountaineering terrain. The course was held in some of my favorite ski terrain, Snoqualmie Pass, and it provided all of the students a great opporunity for both personal and professional growth under the mentorship of AMGA Instructors. Highlights of the course included nearly three meters (9 feet) of snow in a week and the tremendous amounts of shovelling that followed (always good for fitness), lots of storm skiing in beautiful old growth trees, and a chance to get to know a group of really fun guides that I hadn’t crossed paths with before. So, without any more delay, here are some photos! 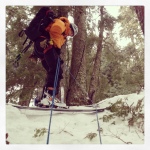 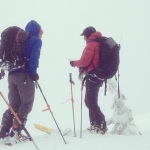 This week I got to pursue some continuing education and professional development in the form of an AIARE Instructor Training Course for AIARE 2 courses.  We spent three long and engaging days refining our skills for teaching the technical content of these programs. And…we also were able to ski and tour around the Snowbird, Utah ski area for about half of each day.  Ski quality varied dramatically from aspect to aspect, but many good turns were had to complement our classroom sessions!

I’m excited to announce that I am now fully qualified to lead AIARE 1 courses and will be assisting AIARE 2 courses starting next week.  Contact me if you’re looking to buff up on your backcountry decision making or snow science skills!

Hiking past the Snowbird ski area boundary during the AIARE ITC 2 course.

Last week, the North Cascades got hammered with snowfall.  Reports varied, but most tallies showed about nine feet of snow in seven days in the northern part of the range.  I was out of town, so I had to live vicariously through friends as they slayed the freshies.

There was a lull in the storm cycle today and since tomorrow marks the beginning of my winter work season I thought it prudent to sneak in a few turns with some friends.  We poked around in the backcountry near the Mount Baker Ski Area and probably only skied about 3000′ vert, but it was a beaut!

Skinning up to Mazama Bowl